Adam Benedičic is one of the newest recruits to the Kelsey Kerridge gym and personal trainer team but he is quickly making an impact with his unique training methods, including calisthenics, a training system using your own body weight. 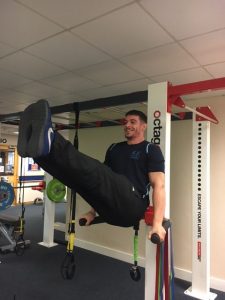 The 25 year old is a firm fan of functional training and believes the best way to train the body is to use your own body weight. “The sort of training I like are things such as pull-ups, push ups and handstands,” he says. “Right from when I was a kid, you would find me climbing trees and doing handstands. I was very active and I was strong for my age.”

There has never really been any doubt about Adam’s career path. He started going to the gym regularly when he was just a young teenager and was lucky enough to have a group of like-minded friends. “There were three or four of us and we would go to the gym together. I really enjoyed helping the others to get better at the techniques of using your own bodyweight, so I suppose I was always interested in becoming a trainer.”

Calisthenics is Adam’s training regime of choice. This is the style of bodyweight training that has its roots in Ancient Greece and has been a major component of fitness in athletics and the military ever since.

“I first came across Calisthenics when I was 18. I found some online programmes and information and it had me hooked straight away – this was the way I liked to train and there it was, it was an actual recognised training system.”

People who attend Adam’s Krunch and Kore classes at Kelsey Kerridge will find a heavy Calisthenics influence. “It can take a bit of getting used to,” he says, “But once you have mastered a move, you feel an enormous sense of achievement.”

Adam also likes to encourage people to think about how they are using their bodies. “It really is a question of ‘healthy body, healthy mind,” he says. “When I first started teaching circuits everyone was very reliant on prompt cards. This meant they just read the card and did the exercise, there was little thought going into it. I gradually phased the cards out and now I like to think the people in my group are learning and thinking about how they are training.”

The bodyweight guru has been at Kelsey Kerridge for four months now and it is, he says, the friendliest and most relaxed place he has worked. “I have been at several gyms before Kelsey and I really feel like I am developing as a member of staff and being encouraged to push myself.”

Here are three benefits of Calisthenics

It strengthens the whole body:

Calisthenic exercises engage more than one muscle group. If you look at the push-up: you basically work your chest (or the triceps, depending on the push-up’s variation), but you also have to brace the whole body including the quads, the glutes, the core and abs. What is more, these muscles have to work in harmony and tone in the right moment.

Most body-weight exercises involve an extended movement amplitude – the movements are fully extended – which results in building strength without loss in flexibility. That doesn’t mean, however, that you don’t have to stretch if you perform crunches, lunges, or squats.