The next few weeks see the countries of Europe going football mad as their national teams compete in the European Championships. The event, taking place in stadiums across France sees the best of Europe’s footballers going head-to-head for the prestigious title of continental champions.

While top level footballers may get a lot of bad publicity – largely due to their stratospheric salaries and the often lurid stories about their lifestyles – there is little doubting the fitness levels of these players. An outfield player, on average, will run 10 kilometres during a game and this will be a combination of jogging, running and flat out sprints. The movement is seldom in a straight line, so the player will also have the added muscular strain caused by changing direction rapidly. Their upper body strength will often come into play as they strive to muscle an opponent off the ball.

If we break down the fitness demands of a footballer in today’s game, they need the following attributes: cardiovascular endurance to last 90 minutes on the pitch; speed to chase the ball; agility to change direction; power to sprint and jump; flexibility to reach the ball when it is almost out of reach; strength to tackle other players or hold their own when being tackled.

So how do you train to develop a footballer’s level of fitness?

After a match, recovery consists of ice baths and plenty of stretching. The aim is to promote blood circulation, increase the oxygen flow to the muscles and help move the lactic acid out of the body.

This is active recovery day. It might consist of a light jog or a cycle – working at about 60 per cent of maximum heart rate.

This is an extended recovery day. Two days after the match is when tiredness and muscle soreness may kick in. This is referred to as delayed onset of muscle soreness (DOMS). Activity on this day remains light – some jogging, stretching, a few light weights. Enough to get the blood circulating well but nothing too strenuous.

The next few days are the high intensity training days. Footballers will do two sessions, with a rest period in between.

Morning: High intensity football work, such as conditioned small sided games focusing on keeping possession with no goals, or a man-to-man game where you have to stick with one opponent wherever he goes.

Afternoon: Strength and power work. For example, squats, dumbbell squats, deadlifts, lunges, bench-presses and pull-ups. Much of a footballer’s fitness demands are centred on the legs, so this is where the weights sessions are focused.

Afternoon: Power development and complex training. This is a mixture of strength and plyometric work designed to develop explosiveness. The focus is low reps at high speed, such as power cleans and hurdle jumps.

Low intensity football work with a focus on tactical preparation. This may also incorporate some speed and reaction time training in warm up. For example, short shuttle runs or reacting to a signal, such as a whistle.

During the season, footballers might also have a mid-week game, which would mean that training would be kept to a minimum on the days in between and just incorporate active recovery. 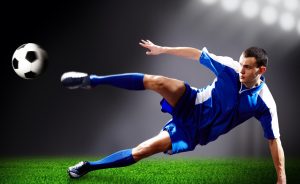 A further important part of match preparation and recovery is a player’s nutrition.

Football matches and training place high physical demands on both fluid and carbohydrate stores of players. Studies have reported low muscle glycogen (energy) levels in players after a match – sometimes with significant depletion occurring by half-time. This can lead to a drop in energy levels and performance.

This is why nutrition is such a key part of the modern footballer’s preparations. Footballers will be eating a high carbohydrate diet in the days before a match, snacking on carbohydrate-rich snacks before the game and drinking sports drinks during the match. A nutritionist will have worked with each player to determine the energy needs of individual players. Rather like a sports car, only the right fuel will get the best performance.

Hydration is also a factor in performance. Sweat losses of 1-2.5 litres per 90-minute game in cool conditions and approximately four litres during hot conditions have been reported in some studies. However, the reported fluid intake of players is typically less than half of the sweat rate. If a player is dehydrated by as little as five per cent, their overall performance could drop by as much as 20 per cent.

And one last point: much is made of recovery drinks and the vitamins they replace. But for an effective recovery, an unlikely hero has been identified – milk. Recent studies presented to the American College of Sports Medicine show evidence that chocolate milk is an excellent post-workout drink that can greatly assists is muscle repair. Athletes in the study who drank chocolate milk after running showed greater signs of protein repair compared to those who drank standard carbohydrate drinks, so chocolate milk rather than French wine is likely to be the footballers’ favourite tipple during the next few weeks.