Today’s blog is taking a bit of a scientific angle. We all know that one of the benefits of exercise is the release of the ‘feel-good’ endorphins, a powerful, naturally occurring substance that makes you feel elated and full of energy, despite just taking part in strenuous activity that should have made you feel tired.

Endorphins have actually been called the body’s natural opiate and scientists believe they react with specialised receptors in the brain and spinal column to hinder or block cells’ transmission of pain signal and trigger feelings of euphoria.

When and to what extent endorphins kick in during exercise depends upon the intensity of the exercise you are doing. As endorphins start to do their work, they will impact you physically, mentally, emotionally and physiologically. Certainly we have all experienced the ‘high’ of an endorphin rush after a vigorous workout but what is less well known is that exercise-released endorphins can have a longer-term positive impact upon a person’s mood and even alleviate depression.

To investigate the effects of exercise and the release of endorphins upon mood, a study was conducted at Turku PET Centre at the University of Turku in Finland and reported in the journal Neuropsychopharmacology.

As part of the study, 22 active men between the ages of 21-36 years took part in three separate study sessions over three days. These sessions were: a 60 minute aerobic, moderately intense session; a High Intensity Interval Training (HIIT) Session and a Rest and Recovery session.

The results made for interesting reading. 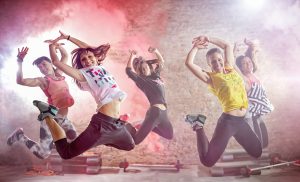 The aerobic session triggered a much more positive reaction all round, The subjects reported feelings of pleasure and euphoria after they had exercised at a moderate level for an hour. The release of endorphins was not as high but it’s impact was also less intense and stressful when compared to the higher levels of release during the HIIT session.

The overall take-away from the study is that the endorphin release that exercise induces could be an important factor in motivation to maintain a regime of regular exercise. In addition, knowing that such “euphoria” can be expected may even be something reluctant workout warriors can take into account when deciding which exercise routines to incorporate.

Coping with the lows

It is also important that participants are aware that strenuous activity such as HIIT can induce feelings of negativity. Knowing that this is likely to happen will help you cope when it happens.

Certainly, this study provides no reason not to take part in HIIT workouts – the benefits of a HIIT workout far outweighs the cost. To reiterate what HIIT can do for you, consider this: One minute of strenuous activity in a 10-minute exercise session can be as effective as working out for 45 minutes at a moderate pace. That also means that 12 minutes of extreme exertion gets you more results than five hours of moderate exercise.

One of the most incredible aspects of HIIT is that such exertion improves glucose tolerance more than any other type of exercise, can burn from 6 percent to 15 percent more calories, produces immediate changes in your DNA and also triggers production of human growth hormone and mitochondrial biogenesis, which are beneficial to your health in so many ways.

Exercise: the way to better health

According to a Harvard study, besides reducing your risk of developing “the big three” serious health complications — heart disease, stroke and diabetes — exercising on a regular basis can lower your blood pressure, lower your weight and even prevent depression.

Exercise can even improve your memory and thinking skills, and alleviate brain fog.

Between these advantages and getting happier from the release of pleasurable endorphins, exercise is a no-brainer.