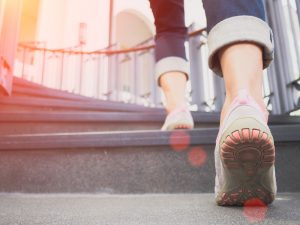 A BBC television programme has claimed the most effective form of fitness activity was the sort that involved short bursts of exercise. According to the programme, three lots of 10 minutes was all that was needed to stay fit and healthy.

The BBC programme, The Truth About Getting Fit, was fronted by Dr Michael Mosley. In it he claimed that three lots of short bursts of exercise were more effective than trudging out 10,000 steps. You could almost hear the collective intake of breath from the nation’s thousands of activity-tracking device owners.

Short bursts of exercise versus 10,000 steps

The programme’s claims blow the current thinking out of the water. The two most accepted concepts behind health and fitness at the moment are that a) if you walk around 10,000 steps a day, you will stay slim and b) you need to do 150 minutes of moderate cardio activity per week to remain fit and healthy.

According to the programme the 10,000 steps concept was based on a marketing idea that emanated from Japan in the 1960s. In the run-up to the 1964 Tokyo Olympics, a doctor, Dr Yoshiro Hatano, from Kyushu University of Health and Welfare, was worried that the Japanese were turning into a nation of slothful television-watchers. He believed that if he could persuade people to raise their daily steps to 10,000/day, they would avoid getting fat and unhealthy. And so a marketing campaign was built around the concept and today’s current regime was born.

Active 10 aims to blow that theory out of the water. In Active 10, participants are asked to walk briskly, meaning their heart and lungs are working hard. Evidence suggest raising your heart rate for several short intervals has several benefits. Among these, it will lower your risk of diabetes, cardiovascular disease and some cancers.

The other bonus is time. It is far easier to fit three times 10 minutes into a day than it is to walk 10,000 steps.

And what about that golden rule of fitness – the NHS recommendation of 150 active minutes per week? Well, if you do brisk walking for 10 minutes, three time a day, you will hit your 150 minute target in five days. If you walk all seven days of the week, you will smash the target.

For people who are already gym bunnies or runners who already pound out the miles, this might seem a very easy ask but it can be utilised by everyone. Even if you do go to the gym religiously after work each night, consider doing the brisk walking during the day to clear your head and reduce stress.

For advice on any health and fitness matters, speak to our knowledgable staff in the Outlooks Gym.