As the names start to accumulate on the scoreboard, one 48 year-old woman decided to give the Kelsey Kerridge Outlooks Gym Challenge a go. Two days later the lactic acid has left her muscles but her name is still on the board among the leaders.

Here, regular gym-goer Sarah Juggins describes the agony and ecstasy of taking part in a challenge and explains why competition is healthy at all ages.

“I have always trained and been physically active but over time I have found my reasons for training have changed.

I used to play national league hockey for Cambridge City Hockey Club, so training was based around the need to be able to run at varying speeds for 70 minutes. Training consisted of endurance work – so I could last 70 minutes; speed work – so I could chase down an opponent and make a tackle; strength work – so I could hit the ball hard; and flexibility – have you seen how hockey players have to stretch for the ball?

When I stopped playing hockey, I concentrated on running. Half marathons were my distance, so the speed work largely disappeared and the mileage went up. As I was in my late 30s, I also spent more time stretching and yoga started to creep into my routine. I also kept up with my strength work, but rather than banging out the bicep curls and tricep dips, I took a more functional approach and used kettlebells for general muscle maintenance.

Injury stopped the running and now I am a cyclocross fan. This means hours on the bike, either on the road or on my turbo trainer. Speed work, endurance work, sometimes just a leisurely bike ride – all because a niggling foot injury has said no to much running.

But while I have replaced and renewed my training regime to fit my lifestyle, quitting the hockey scene did leave one enormous gap – competition. Sure, running races were competitive, there is a surge of adrenaline as you line up at the start; cyclocross is highly competitive but events are not as regular as the weekly hockey battle and there is nothing that replicates the thrill of a team sport and the competitiveness that kicks in as you face 11 players determined to beat you.

However, very much as you change your training to reflect your activity needs, so you adapt your competitive opportunities. For me, and many other gym goers, training has to have a purpose. As a hockey player, the purpose was clear – you had to be quicker, stronger and be able to out run your opponent. As a runner, you just had to go quicker; as a cyclist, you had to be fitter and technically better than the next rider.

And this is why the Kelsey Kerridge gym challenge is such a great innovation. It gives people a chance to experience competition and gives a purpose to training and improving. It is simplicity itself: how many reps can you do in 30 seconds on three activities. A total of 90 seconds divided between kettlebell swing throughs, Bulgarian bag lateral swings and rope slams. I defy anyone with an ounce of competitiveness in their soul not to experience a frisson of adrenaline as they prepare to take the challenge.“ 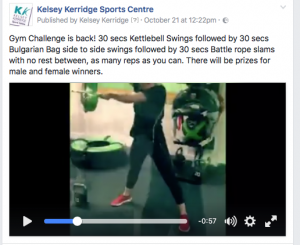 To take part in the Kelsey Kerridge Gym Challenge, pop into reception and ask one of the team of gym training personnel to help you. They will explain how the challenge works and count your repetitions. Good luck and enjoy the challenge!