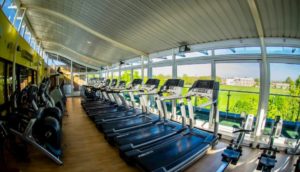 The advent of virtual reality (VR) exercise has provided a tool that could well encourage a whole new generation of people to take up activities. Albeit in a completely new way.

Physical fitness experts continue to explore ways to entice people to add more activity into their lives. And to achieve that goal they are increasingly turning to technology.

Whether it takes the form of VR headsets, VR screens or virtual reality games, creating an imaginary and interactive world is a new and effective way of getting people to expend energy and move.

There are various forms that virtual reality induced exercise can take. From the screens that we currently use in the Outlooks gym, to the 3D worlds designed by app creators.

Competitive and recreational athletes can find a whole world of challenges on the cycling and running app Zwift. Like-minded runners and cyclists can undertake tough challenges and enter races. A community is created as cyclists and runners participate in bespoke training sessions. It doesn’t need to be competitive – users can just go for a run or bike ride. The beauty is that this is from the sanctuary of their own room. All a user needs is a static bike and a screen or a treadmill and a device with a screen. 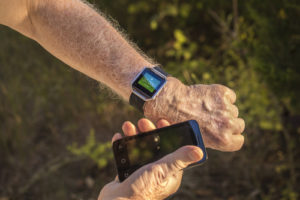 Stepping into a virtual reality world

For people who love computer games but also want to be active, then a VR headset and a boxing app could be the perfect answer. New father Martin Calugay is quoted on the web-based news channel NBCDFW as saying: “When I put my headphones on, my living room becomes my personal boxing ring. I have a new baby and a full-time job so combining my love of computer games and a physical workout is a great use of time.”

The science behind virtual reality exercise

The Institute of Health and Exercise at San Francisco State University carried out a study to look at the impact of VR exercise. The study measured the oxygen used during VR gameplay across 20 different video games. These were compared to traditional physical activities such as tennis, jogging and so on. The results were impressive. One VR game, The Thrill of the Fight, which involves boxing movements, burnt between 9-15 calories per minute. The Wizards – a game involving dodging enemies – burnt 3-6 calories a minute. Nightstar: Starfighter burnt 6-8 calories per minute – a similar rate to a medium to high intensity cross trainer workout. The study results can be seen here:

The main beneficiaries of VR fitness are currently be time-pressed parents or people who just don’t want to make the trek to the gym or face the weather outside. However, there are signs that VR fitness will soon be in the main stream.

Gyms in California are beginning to incorporate VR workout classes into their schedules. The following is a report from news channel CNN on the latest fitness innovations to hit the gym floor.

“The spin instructor let out a loud “Woooo!!” as she led her students up hills, through rings of fire and outer space. They even rode through jungles, deserts and fantasy worlds.

It’s part of a trend called “immersive fitness,” harnessing the power of sound, visuals and sometimes scent to immerse exercisers in different environments.

CNN recently observed a class at 24 Hour Fitness in Santa Monica called “The Trip” which is offered in just a handful of gyms in the U.S. The elaborate videos appeared on floor-to-ceiling 3-D screens and were synchronized to music.

The spin students peddled in a room lit mostly by the screens. They leaned their bikes side to side, up and down as if they’re riding the curves and hills in front of them.

Proactively take control of your physical and mental wellbeing. The Staying Well series offers actionable steps from experts to embrace healthy living in the long run.

“You’re out of reality and you’re in this other little land,” said spin student and makeup artist Kriz Crane. “The fact that it has the screen makes you forget how hard you’re working.”

A new generation of gym-users

For now, VR exercise is mostly confined to the home but there is little doubt that many gyms across the country will be tapping into the idea soon. Whether at home or in the gym, it hits a new demographic. Young, computer-savvy tech-focused kids are the obvious market. But, there is also a place for people with disabilities, both physical and learning difficulties, as well as for people who suffer mobility issues.

As one space traveller didn’t say: “It’s exercise Jim, but not as we know it.”